The name of our site is Rare & Friends, and our primary focus will always be on Rare first and foremost; however, the “& Friends” part of our name is not without meaning either.

Rare has spawned so many studios and has worked on and/or created so much IP that the fandom really not only extends to Rare, but everything they helped create, if on purpose or not.

Up until now, we haven’t really got too much into how far the “Friends” banner would extend, partly because we didn’t know ourselves, since we had yet to set up any sort of defined rules.

Rare and Playtonic Games are pretty much a given at this point, but let’s get the rest sorted for you fine readers.

Rare & Friends will be covering any studio formed by Rare veterans with the intent to produce console games. This includes Playtonic, Gory Detail, Nyamyam, MakinGames, and Free Radical/Dambuster. Small, mobile studios formed by former Rare devs will not be covered until they actively start working on a console project… unless their mobile studio is run by the founders of our fandom, Tim and Chris Stamper. Because of the importance of the Stamper Bros, FortuneFish will be an exception from this rule and will be covered on Rare & Friends. However, while we will post news items, talk about and promote the company and its games, no L.O.G. Cast episodes or reviews will be entirely dedicated to their games until they begin work on a console project.

Now what about the IPs that Rare has worked on in the past, but doesn’t own?

Rare & Friends will cover any new game not made or owned by Rare or Microsoft, that is either developed or marketed as a successor to a game that Rare worked on. This includes Retro’s Donkey Kong Country games, as well as the 2010 GoldenEye game and GoldenEye: Rogue Agent.

No current Star Fox or Disney games will be covered, since neither Star Fox Adventures or Rare’s Disney racing games have ever had a direct successor.

Rare & Friends will also cover any new game developed by another company in a series that Rare created, such as the 2013 Killer Instinct game, and Conker’s Big Reunion.

Please take a look below for the full list of non-Rare or Playtonic games that have been added to our coverage. In addition to the Rare/Playtonic games listed on dedicated pages of our site, these titles will also be fair game for possible L.O.G. Cast episodes and throwback reviews in the future. 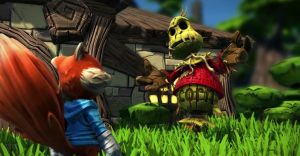 No direct mobile game reviews or podcast episodes, but we will cover and promote the company and its games.

Listen from the start!